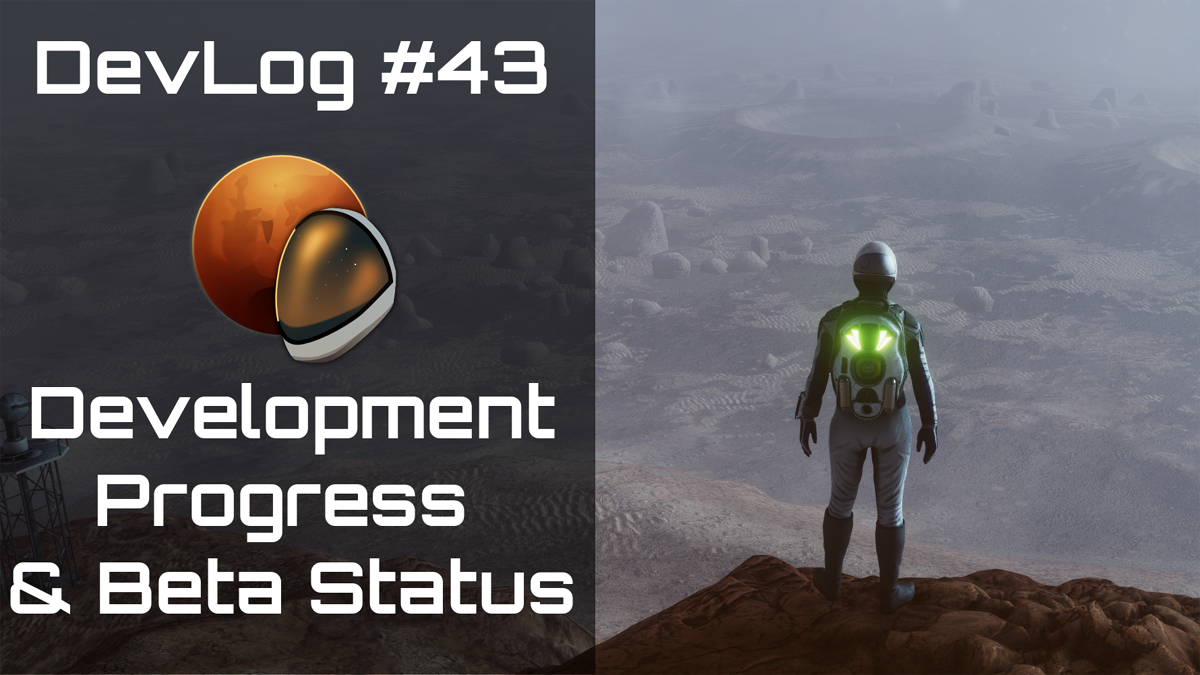 We’re back with another devlog!
As some of you may know, we’ve been busy with another game of ours that has just been released, Dinosaur Fossil Hunter, but that doesn’t mean development of Occupy Mars: The Game has stopped! Quite the opposite, we have a lot to talk about, so let’s get on with it!

Our dev team cooperates with a team of artists to further improve game UI and Tablet interfaces so it’s both intuitive to navigate and true to Occupy Mars technical spirit. Some of the screens we’re working on are:

Sleep Panel in particular went through some big changes and while it can still go through some changes, we’d like to show you its current look! Now you’ll be able to set the time with up/down arrows or use a slider to set the time even more accurately. You’ll no longer have to set time to full hours. Want to take a 30 minute nap? No problem! 🙂

The map you can access through the tablet menu is now also available in the rover, so during the long journeys, you won’t have to move away from rover controls in order to check your current location! Moreover, the map will allow you to control the electricity flow in your base. Other than that, you can also remotely activate and deactivate switches to control the flow of other substances, such as water in pump station.

Graphics of Occupy Mars: The Game keep getting better day by day! Of course, the most major changes are already past us – you don’t need to worry. 🙂 What we’ve decided to work on further is lightning and postprocessing. Thanks to recent improvements, scenes look much more realistic, which you might have already seen on some of our more recent screenshots. Here is a little comparison:

To add more life to the game, we also want to make use of motion capture and include more animations. Our astronaut will have different animations while sleeping, sitting and much more!

Some tweaks were made to the rover lights and player’s flashlight. We noticed that at their previous state, lights were barely able to provide enough light for the player. Flashlight is now positioned a little bit differently and its light is much more intense, while rover lights should give you a good enough light to see the rover’s closest surroundings.

Weather effects have also been improved to blend in nicely with the current game’s graphics and lighting. New weather effect Solar Storm has been added which is even more vivid and beautiful with the new lighting system.

World of Occupy Mars: The Game keeps expanding and there are even more locations to explore!

Besides lava tubes you already know about, caves can be found at random places. You’ll be able to find items in some of them and they can also serve as a good hiding spot when weather unexpectedly worsens.

There are also more abandoned bases scattered throughout Mars. Contrary to the other ones, these will look differently and hide very useful equipment such as parts necessary for building a jetpack or your robot companion Spotty.

We are also working on numerous additional mechanics.

Speaking of remote control, we have finished implementing mechanics related to antenna and their radio range – if you’re within the antenna’s reach, you’ll be able to remotely control various devices.

Now, this mechanic is closely connected to the aforementioned Solar Storm. If you enter the radiation area, you receive damage at once, and it will only cease after leaving the affected area. There are also specific areas where you can expect a high radiation level – for example, areas with uranium rocks nearby.

As for a brand new mechanic, there will also be a helpful system which will highlight the interactable objects in the area.

Our team is now working on a rocket launcher mechanic, which will allow you to shoot down meteors endangering you and your hub. This is a work in progress and we hope to tell you more about it in the future, as well as about many other things we have in store. 🙂

As the end note, we’d like to tell you about the status of the Beta and hopefully clear up some confusion that has arisen recently.

So far only small numbers of people got access to the beta since we wanted to iron-out some issues and also finish the above-mentioned content updates before we let more people in. The people who played so far also had an NDA to avoid spoiling the unfinished parts 🙂

Now the time has come and in the next few days we are going to let a few thousand more people in. This is an important milestone in preparation for the Early Access Release. To keep track of all your feedback we have also created a separate Sub-Forum on Steam called Beta Discussions where it will be easier to keep track of the beta related issues. Please also remember to fill our survey after playing the Beta.