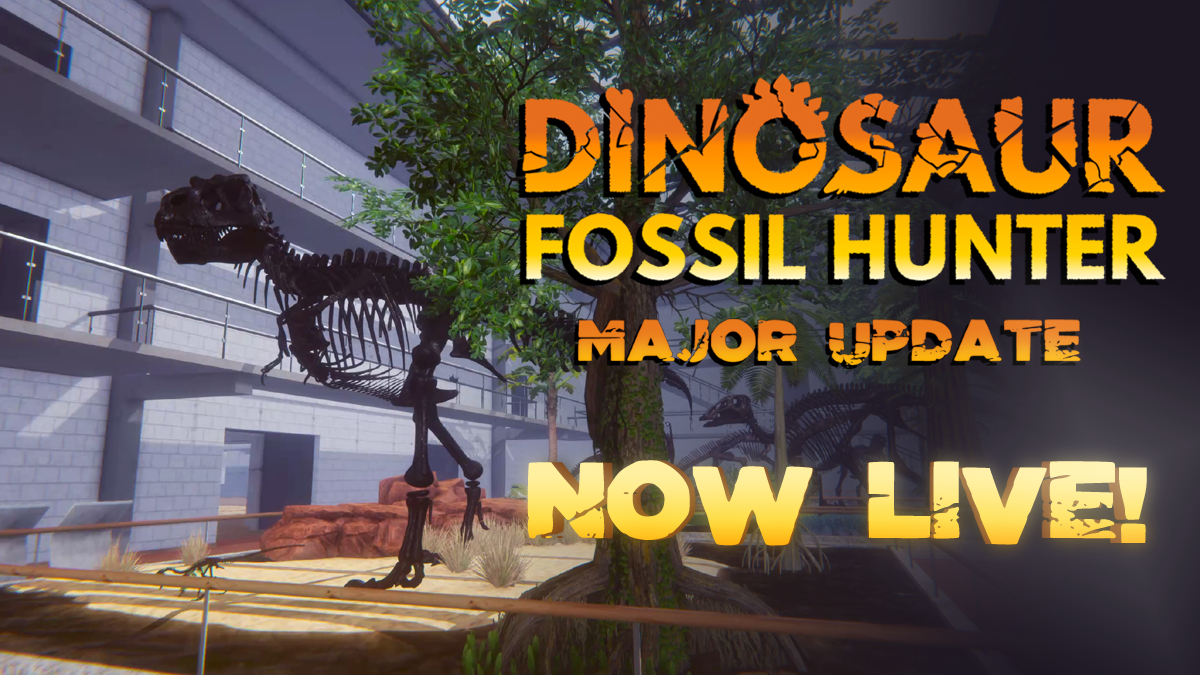 At last, we can present to you…

In celebration of the Update’s release, we have prepared a discount for all the aspiring paleontologists:

20% off Dinosaur Fossil Hunter until August 30! If you haven’t tried the game yet and you’re wondering if it’s a game for you, read on and see what is waiting for you! 🙂

Trailer gives a good overview of all the new content, but let’s skim through it all once again:

Grizzly Mountains location is now available and open for exploration! And there is a lot to explore – it’s a vast area, which should meet expectations of the most advanced paleontologists. Fields, hills, rocky mountains, wetlands… this place will require all of the skills you’ve learned so far in order to uncover its secrets!

There are four new dinos waiting to be discovered and 11 new skeletons to find and assembly!! What are the new dinos? Perhaps you were able to spot them in the trailer above. If not, let us unveil this mystery!

The dinos waiting for you are…

Is your favourite dinosaur among these? There can never be enough dinos, so we hope these will bring you a lot of joy and you’ll be proud to showcase them in your museum!

New journey requires a new car! Time to take this new pickup for its first ride!

It’s vital to have enough room to showcase your finds and that’s why you have an additional museum hall at your disposal!

They’re fascinating finds! They come in all sizes and shapes, they store remains of small extinct animals, plants, they don’t take much space in your museum (meaning you can fit a lot of them in one room) and now that the Update is here, there are even more of them to collect!

More dinos, more space in your museum, more small fossils… It’s only a given that you would also get more decorations to add even more diversity to your museum! We can’t wait to see which ones will be featured in your newest expositions! 🙂

New game mode – unleash your creativity in the Sandbox Mode! Use the decorations and dinosaurs unlocked during campaign mode to create many new unique versions of your museum!

Aside from this, numerous new fixes have been applied to the game as well. We’ve also added some new game mechanics! One of them is picutred below. You’ll be able to mark rocks you examine with paint – red stands for an ordinary rock, which doesn’t contain anything worth noting, while the light green color marks rocks with fossils inside.

Like always, if you find an issue during your playthrough that this patch hasn’t fixed, please let us know! Steam forums work well for that – we’ll get back to you as soon as we can.

You can also contact us via email address [email protected] and send us your game files such as your save file and log file, which are very helpful for investigating your issues.

Both save files and log files can be found in the following directory:

AppData folder is hidden, which might make it difficult to access it through File Explorer. In that case, try one of these methods to locate your files:

1. Copy and paste full directory into the bar of your File Explorer.

2. Copy full directory, press Windows + R and paste this directory into the field of the box that shows up.

Once you do any of the following, you should be redirected to Dinosaur Fossil Hunter folder, where you can find:

You can also zip and send us entire Dinosaur Fossil Hunter folder if you prefer – we’ll figure out the rest!

That’s it! For this update, of course. 😉 We hope this new update will bring at least a few hours worth of fun to your playtime.

If you have some time to spare while your game is updating, we invite you to our live stream that is starting now on our Twitch & YouTube channels. Unfortunately, due to ongoing issues with Steam streaming we weren’t able to bring our stream to Steam this time around.

For now, we’re awaiting your feedback and further suggestions! We’ll continue improving Dinosaur Fossil Hunter for you all and for now, we’d like to learn more about your current impressions of the game, so we can take them into account while planning next updates and patches.

Other than that, there is a Designer DLC🎨 in the works and as soon as we have a release date set for it, we’ll let you know! Referring to some of the feedback we’ve received from players, we’d like to assure you that the statue model currently used in promotional materials will be changed – as with the actual game, we’ll make sure it’s more anatomically correct and closer to its real life counterpart.

Now, all that’s left is to wish you fruitful exploration! Pack your equipment, take a seat in your new car and start your adventure in Grizzly Mountains!