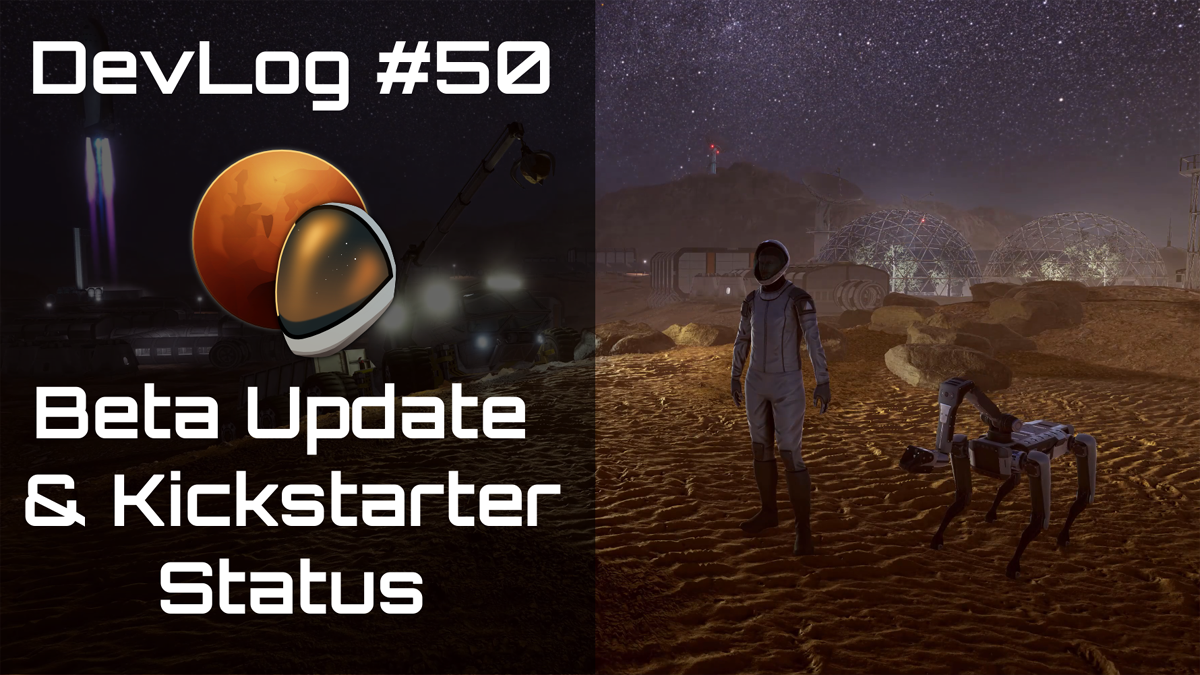 Welcome to our 50th Monthly Devlog! We have just released the long-awaited Beta Update v0.99.2 which includes big changes such as:

An important rework of the interaction system has been completed and playtesters can now check it out. It was a very important milestone on our roadmap to Early Access, which should address one of the most frequently reported issues – to make the controls more responsive and more user friendly.

The most important thing you should know about the New Interaction System is that now:

* pressing 1x LMB = picks up an item to your hand, and then:
— the second time you press LMB = it will collect the item from your hand into your inventory
— if you are holding any tool then of course the LMB will intuitively use that tool
— press 2x LMB quickly (or hold CTRL+LMB) to take the item from the ground directly to your inventory (no more hold and wait!)

After carefully analyzing your requests and after many discussions we decided to add the new ESC Menu.
– All the game settings, saves and control settings were moved from the Tablet to the new Pause Menu
– You can now press ESC at any time during the gameplay (except a few places) to open the Pause Menu which is separate from the Tablet functionality.

Today we also have something special for you: the new main menu you know from our last weekly streams has been merged with the Beta branch so now you can admire it in its full glory. We’ve also uploaded a music video from it – a 4K artistic experience – you can watch it now on our YouTube channel:

If you love it like we do, you can listen it on repeat here ➡️ https://pls.watch/#v=uOsiigPeF1I 😉

Known Issues in this version:

The above mentioned known issues will hopefully be fixed in the next 0.99.x build. Please let us know if you find any more issues.

Our plan currently is that builds up to version v0.99.x will be the last builds for the beta, and builds v0.100+ will go only to the main game Early Access branch so that we can focus on the main game release and make sure everything is polished there.

Build v0.100 is a great milestone – it means that we have completed over 100 2-week sprints while working on the game since the beginning. Looking back at those 5 years, it’s hard to imagine the amount of work we’ve put into it, we hope you will enjoy it. For the next build, we’ll be focusing on the most important Tech Tree and Balance changes necessary before Early Access Release.

As we promised in our Previous Update, we’d like to let you know about the status of the upcoming Kickstarter campaign as soon as anything clarifies.

Just before Christmas we’ve learned that another Kickstarter campaign for a different game was started on the same partner account so we need to wait until it ends. We were surprised by this but, after talking to advisors experienced with Kickstarters they said it’s a good thing because campaigns during Winter Holidays historically aren’t as successful and that January is better time. So after talking it over, we’ve accepted this fact since this is better for the game as well.

So we can finally confirm that our Kickstarter campaign will launch on January 17th. That also means that Early Access release will come later than January 2023 (after the Kickstarter finishes). As for our talks with potential international publishers (mentioned in the last devlog) they are still ongoing so we’ll keep you posted once we have some more information about it.

We’ve also made a small update to the game’s official page – added a countdown for Kickstarter Launch:

To all of you who find Occupy Mars: The Game Playtest version in their Steam library – we hope you’ll enjoy the game and please remember to give us your feedback!

A separate Sub-Forum on Steam called Beta Discussions was created for those who have access: LINK
After playing please also remember to fill our Beta Survey: LINK

We also have dedicated channel on our Discord server!

Sorry we were unable to post this before Christmas but all this clarified on the last moment and also some of us got sick (Flu Season), but now we are back at work with full speed! 🙂